Reduce, reuse, recycle…for years that’s been the mantra of the environmental movement, and the Cuyahoga Land Bank works hard to be mindful of the ecological impact of its demolitions. Now, a new Demolition Waste Recycling/Backfill pilot project partners the Cuyahoga Land Bank with Kurtz Brothers, Inc., a local landscaping and construction materials supplier, and the Village of Newburgh Heights, to take our earth-friendliness to a new level. 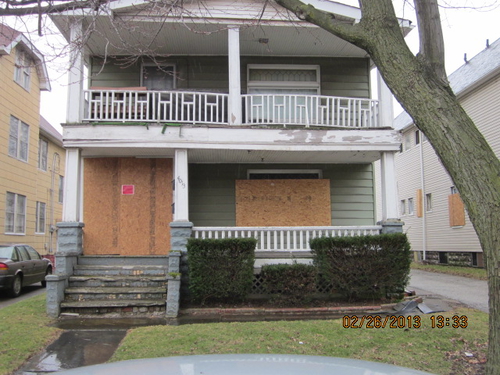 “We’re always looking for ways to be greener,” says Rosemary Woodruff, Properties Specialist with the Cuyahoga Land Bank. But tearing down a home presents more than a few challenges.
The first task is to salvage easily accessible interior features of the house that can be sold or donated, such as doors and cabinets, but in extremely dilapidated houses, there is not much that can be rescued, so it all becomes rubble. Until now, that debris was hauled to the landfill, and the contractors re-loaded their trucks with free backfill, waste from other demolitions, and used it to fill basement cavities.
The problem was that backfill had too much rock, clay, wood, glass, and other construction debris, making it difficult to grade. “Despite our specifications, which call for clean, gradable fill material, we often have had to send some of our contractors back to redo their site finishes.  We have concluded that we need to control the quality of the backfill used on our sites.” 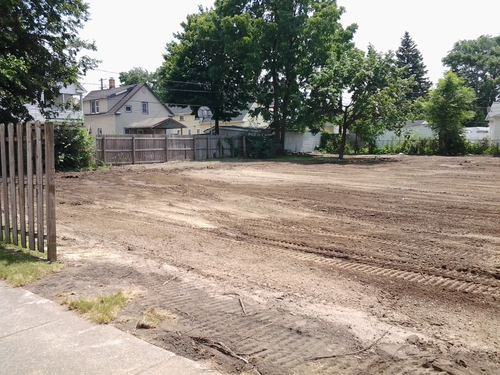 That’s where we call on Kurtz Brothers for expertise. For 30 potential demolitions located within a 5-mile range of the Kurtz Material Recycling Facility (MRF) in Brooklyn Heights, contractors will take the waste to the MRF instead of the landfill. The debris is loaded onto conveyor belts where wood, metal, stone and other materials are separated. Then the demolition contractors load Kurtz’s specially blended backfill—a screened sandy loam commonly known as the “Land Bank Blend”—onto their trucks from the same site, bypassing the landfill entirely.
The process was tested on three demolitions in Newburgh Heights, with great success. “Recycling the demolished construction waste is a wonderful way to pull a little something good out of what is generally an unfortunate action,” says Mayor Trevor K. Elkins. “I am excited we have been able to partner with the Cuyahoga Land Bank on this program and provide positive feedback for other communities interested in participating.”
As the program goes forward, demolition contractors will see reduced hauling costs, and less time and labor invested in rock hounding, re-grading and reseeding sites that were rejected because of poor backfill. Communities will benefit from better drainage, resulting in less runoff to the sewer system, lower fuel emissions because of fewer truck runs, control of fill quality and, eventually, more jobs if a new MRF is needed.
The “Land Bank Blend” probably wouldn’t make good coffee, but, Woodruff says, it’s better for lawns than the backfill contractors had been using previously. “It grows things pretty well,” she says.

One thought on “Greener Demolitions”