Once a property sits vacant for three or four years, people sometimes become accustomed to an eyesore in the neighborhood. They have their own problems to deal with, after all. Eventually the city will come along and raze it…right?
Not in Cleveland’s East Boulevard Historic District! Glenville neighborhood residents do not give up so easily, and the newly renovated show place at 875 East Blvd. is their latest triumph. 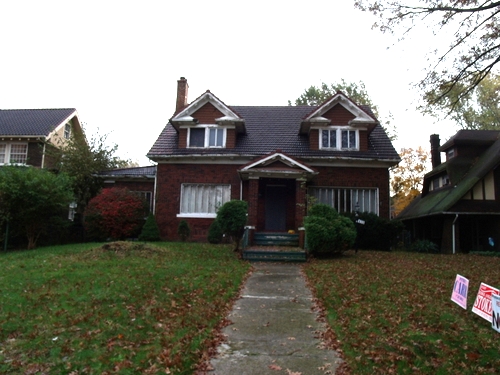 A victim of tax foreclosure, this single-family home had been forfeited to the Cuyahoga Land Bank with the agreement that Famicos Foundation would renovate the property. Famicos acquired the property from the Cuyahoga Land Bank two years ago and got to work. “This is the first home in a larger effort to recapture the neighborhood from the foreclosure crisis,” says Michael Palcisco, Project Manager for Famicos.
But it takes a village to rescue a neighborhood, and this 4,032 square-foot home had plenty of supporters. Ohio House District 10 Representative Bill Patmon got involved, helping to arrange a grant from the Ohio Development Services Agency to acquire, renovate and re-sell the property at market rate.
The first step was a full set of architectural plans for the 4-bedroom, 3½-bath home (project rendering displayed below). The house was gutted to the brick exterior structure, spray foam insulation was installed, interior walls were rebuilt and high-efficiency windows and HVAC systems were added. A new, tankless water heater added even more efficiency.
The renovation plan also added accessibility with a zero-step entry, 36-inch doorways, a walk-in shower and a second-floor laundry. “We tried to envision what an aging-in-place scenario would need,” Palcisco said

.
The property was sold as a market rate historic renovation.  The project could not have been accomplished without the outstanding effort of Allan Builders who partnered with Famicos Foundation on this extensive historic renovation project.
Palcisco doesn’t hesitate to credit the Cuyahoga Land Bank for its role in the project. “They’ve been an incredible partner in terms of property research, acquisition and lining up small grants.”
“We’re thrilled to work with them,” Famicos Foundation Executive Director John Anoliefo adds.
The new owner is relocating to Glenville and plans to live in the house. “He’s impressed by the friendliness of his neighbors, and their enthusiasm for Glenville’s resurgence,” Palcisco says.
For Famicos Foundation, the next projects are already completed or underway: renovating 13 historic doubles in the East 105th Street neighborhood; renovating several homes in the Ashbury Circle North area which were acquired with the assistance of the Cuyahoga Land Bank and renovating even more homes in the East Boulevard Historic District.