Imagine being in temperatures of 400 degrees and higher with zero visibility while carrying 57 pounds of water.  It is hard to hear and time is of the essence.  This scenario sounds incredibly dangerous yet firefighters put their lives in this danger every day on the job.  With no room for mistakes, training is especially important and that is why most firefighters in the Cleveland area choose the Cuyahoga Community College (Tri-C) Fire Academy. 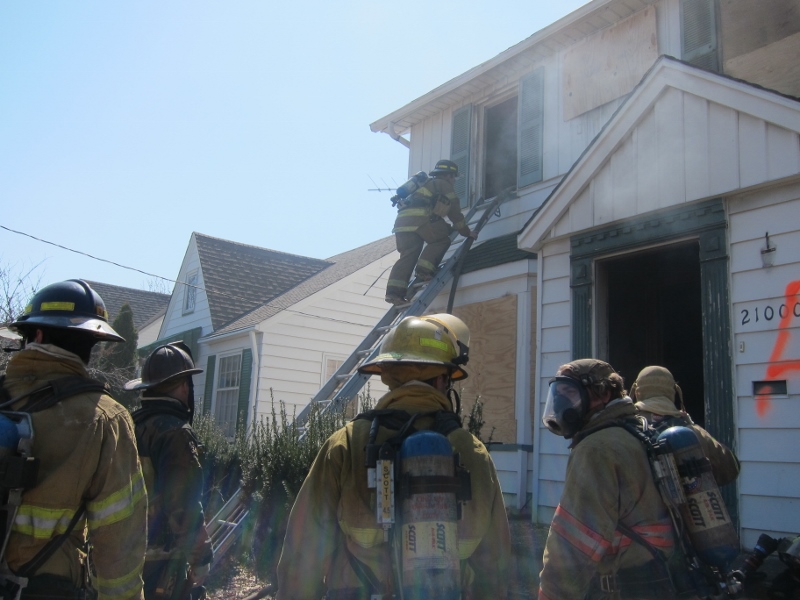 Fire Academy students culminate their experience by participating in a live burn Urban Search and Rescue training exercise, which simulates a real house fire.   In order to do this, they need a site in which to practice.
The associate commander of the Fire Academy, Daniel Waitkus, reached out to the Cuyahoga Land Bank about a year ago to discuss a partnership.  Since then, the Fire Academy trains on Cuyahoga Land Bank owned properties at least four times annually.
“We’re truly grateful to be able to work in professional collaboration with the Land Bank.  Working with Cheryl Stephens and Jim Maher has been wonderful,” said Waitkus of the partnership.  “Any opportunity we have as first responders to simulate a life-like situation, the types of situations we would encounter, is an invaluable opportunity to learn and hone the craft.”
The most recent training occurred on April 2nd, 2014.  A class of 26 firefighters from Lake, Lorain and Cuyahoga counties was led by Brian Harting, team leader for the Ohio Response System.  The building had been intentionally partially collapsed in preparation for the training.  The ten hour training was to practice skills and tactics for the firefighters to safely get people out of a damaged building and to search for any victims within the structure.
Watch Urban Search and rescue training in action.
“The Land Bank has been very accommodating as far as making this happen,” said Harting.  “To find a house and partially demolish it has allowed the team to improve their skill sets in a live setting.”

The most recent live burn training took place in a residential area in the City of Euclid, which included firefighters from the Euclid Fire Department.
All participating firefighters were divided into 6 companies, or groups, to rotate through the different stages of fire fighting.  The lead instructor/incident commander for the April training was Chief Patrick Finneran, the Assistant Chief for the Parma Heights Fire Department who acted as a fire chief would in an actual fire setting.  There are 6 teaching stations, which are completed in this order: Attack, Rehabilitation, Horizontal Ventilation, Observation, Pump and Back Up.
Perhaps the most interesting thing about the live burn is that the house itself is not actually set on fire.  Instead, Class A Combustibles – commonly known as wood pallets and straw – are ignited for the live burn.
“People get the idea from TV and movies that when a building is on fire you have to be in direct contact with fire and flame to be injured, which is not true,” said Waitkus.  “It is literally like opening up your oven and crawling inside of it.  It is that hot in there.”
For safety, all furniture is removed before the training, and the ceiling is covered with a cement board to prolong the fire from destroying the room. Each time a company begins the attack stage, a new fire is lit.
As for the firefighters themselves, “…they love what they do and are passionate about fire service,” Waitkus said.