Just hearing the name of Frank Kuhar’s housing development firm—“Revived Housing Inc.”—tells you his philosophy about run-down properties. He knows some have to be demolished, but he would much rather give them new life if he can, letting them “age in place,” he says.
So when he heard of an abandoned building in an industrial section of South Euclid, he sta 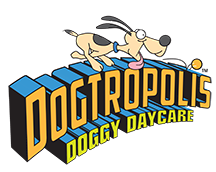 rted thinking of how it could be reborn.
“This building had been vacant for at least ten years,” says Michael Love, Economic Development Director for the City of South Euclid. “It was tax delinquent, the owner wasn’t maintaining it and it was in foreclosure.”  That’s when the Cuyahoga Land Bank stepped in to help acquire the building.
Kuhar looked at the building and saw its potential but, he says, “It was in pretty bad shape. It had been neglected, squatters had been inside—it could have been a demo—but I had a notion it could be a good home for DogTropolis.” He knew DogTropolis very well; he’d been taking his Yellow Lab, Haley, to DogTropolis Doggy Daycare (formerly DogTopia) for years. Kuhar mentioned the space to the DogTropolis owner Connie Karlowicz (a.k.a. “Top Dog”) and they visited the building that same afternoon.

“It’s double the size of our old location in Cleveland Heights a total of, 8,000 square feet,” she says. “I went home and sketched a layout that night in my kitchen. Frank let me design the whole thing so that it fit my businesses needs” said Connie.  Her doggy guests are thrilled with their new digs; they have a 3,500-square-foot playroom, a huge fenced outdoor play area and oversized kennels for overnight stays.
It’s been an exciting project for Kuhar as well. “It has a vaulted ceiling, steel roof trusses, 14-foot-high walls—kind of retro, a cool industrial look,” he says. The work, he adds, was “pretty much an overhaul” which included new heating and cooling systems, windows, garage doors, flooring and plumbing. He laid a concrete pad behind the building for the play area and built offices and a reception space. Soon he will install energy-efficient lighting because, he says, “I try to be responsible about conserving energy.”
“The new space is convenient,” he adds, chuckling: “There’s a veterinarian right next door.”
For Karlowicz, even the location is a huge bonus.  “It’s just 1.3 miles down the road,” she says.  “I lost no clients, and gained some new ones!”