On a drizzly Saturday in May, an assorted group of friends, neighbors and community volunteers came together to nail together boards, rake leaves, mow grass, shovel dirt and put in plants on two vacant plots of land where houses once stood on East 117th street near Buckeye Avenue in Cleveland. Age groups ranged from seniors to toddlers; they differed bo 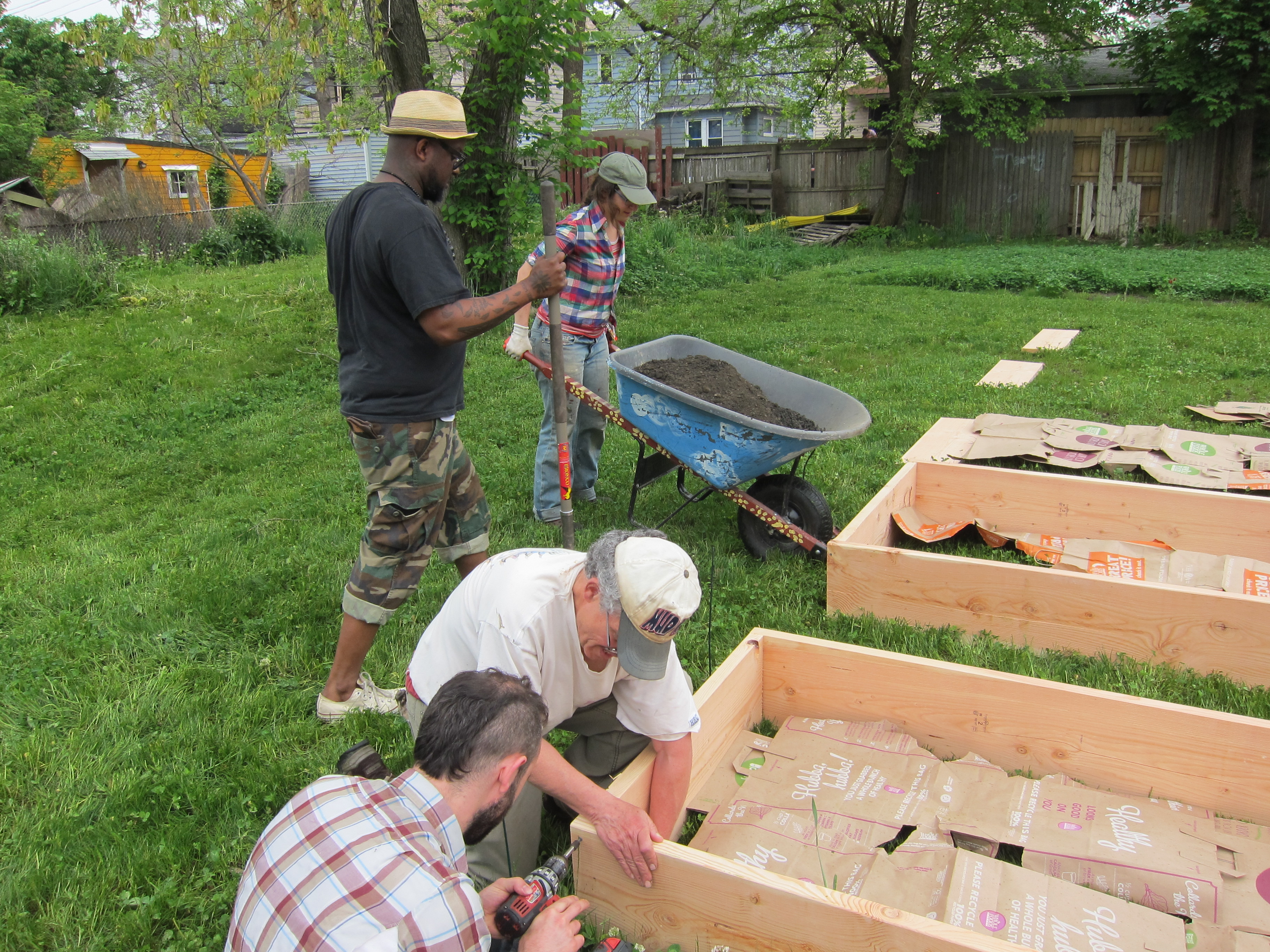 th racially and economically. Everyone was laughing, sweating and getting dirty.  They were building a garden!

Diana and Daniel own the house on one side of the East 117th Street Community Garden and Liz owns the house on the other side.  Liz previously had applied to the City of Cleveland Land Bank to acquire the vacant lot adjacent to her house for property expansion.  Diana also had purchased the vacant lot next to her house from the City Land Bank and then recently acquired the lot adjacent from the Cuyahoga Land Bank Side Yard Program, which had previously been a vacant and abandoned house that was demolished by the Cuyahoga Land Bank.  Once Diana acquired the side yard, Liz suggested forming the lots into a community garden for the neighborhood.

“Thanks to Liz these lots are now a community garden,” said Diana.  “When we began gardening on her side yard, the neighborhood kids came out to help and it inspired her to start a conversation about making it a community garden.” 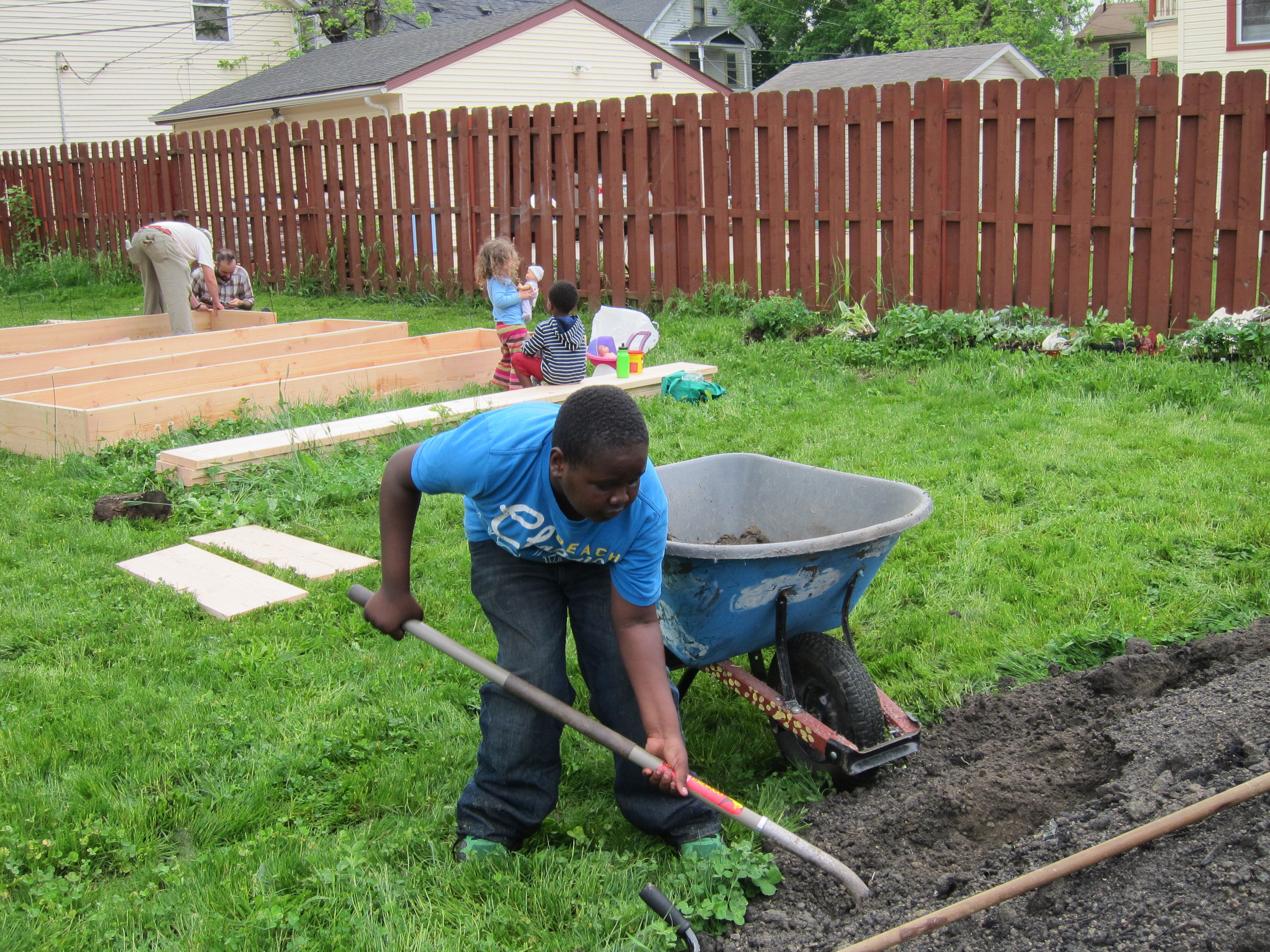 Liz has been a part of the block since 1986.  She believes that creating a sense of community by having people involved with the garden can have a positive impact on the neighborhood.  She’s been putting up posters and knocking on doors to convince people to participate.
“I think it brings life to the street because people in passing see that we want to contribute something positive,” said Liz.  “If other people see we are doing something, they may want to be involved.”
With the help of Lilah Zautner, Manager of Special Projects and Land Reuse at the Cuyahoga Land Bank,  Diana took ownership of the second lot and then the duo was on their way to making their vision for a community garden a reality.
“We are excited to see how this side yard is being transformed into an asset for the greater community,” said Lilah Zautner.  “It is great to see Clevelanders reimagining their private spaces as community places for the betterment of the neighborhood.”
Thriving Communities Institute (TCI) is supporting Diana in obtaining a Cleveland Climate Action Fund Grant.  Special Projects Manager for TCI, Jay Westbrook, joined the garden kick-off in May.
“At Thriving Communities Institute, we love projects like this that pull the community together and return formerly distressed properties back to productive use,” said Westbrook.  “It was really great to see the City and the Cuyahoga Land Bank work hand in hand to make this garden possible.”

Diana and Liz envision a community orchard, a working greenhouse, an edible forest garden with native trees like paw paws, hazelnuts, serviceberries and persimmons; along with perennial berry, bushes, herbs and flowers.

“I am looking to create a space that is healing, welcoming, educational, inclusive, and nourishing,” said Diana 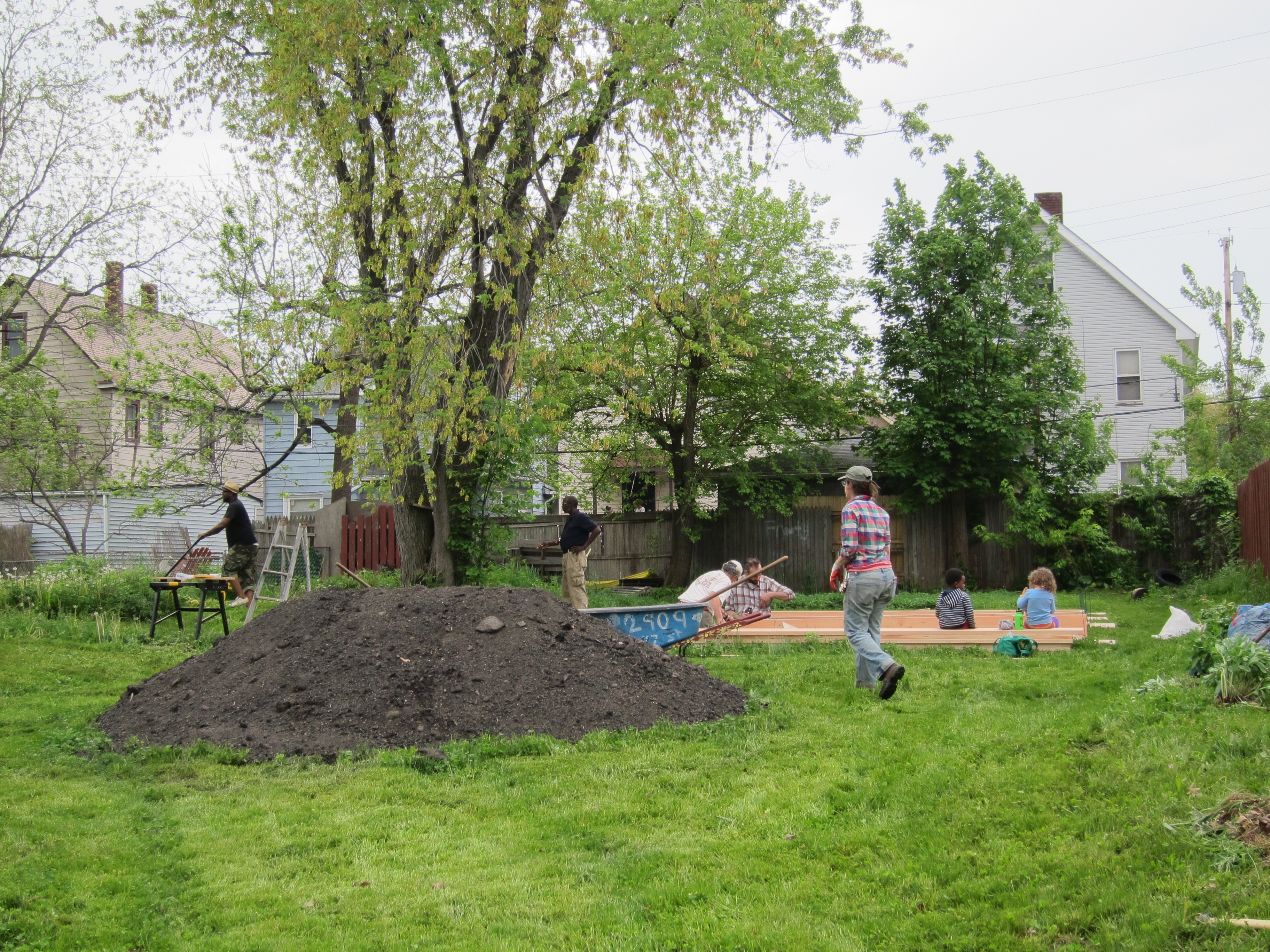 , who has again expanded her vision for the East 117th Community Garden.
The raised beds will belong to the people that plant them and other areas of the garden will remain open for the entire community to use.  Diana and Liz are hosting regular community meetings to ensure that everyone benefits from the space!