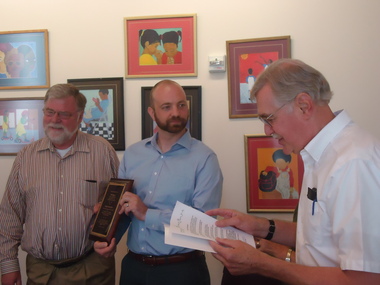 ug Sawyer, and Chief Operating Officer, Bill Whitney, for assistance to acquire three abandoned commercial properties near East 127th Street and Larchmere Boulevard, formally owned by the Sedlak Furniture Company.  Several years ago, the deteriorating buildings fell into new ownership and stood vacant.  SHAD was supported by Shaker Square Alliance, Larchmere Merchants Association,Organize Ohio, consultant Charles Bromley and area residents, in its request to the Cuyahoga Land Bank to acquire the properties through tax foreclosure.Before the County could honor the request to begin tax foreclosure the properties had to be freed from a California bankruptcy court, and an existing tax lien certificate had to be addressed.  After several months, Sawyer successfully had the court release the properties and the Cuyahoga Land Bank partnered with SHAD to purchase the tax lien certificate.  With these hurdles out of the way, the county could began the tax foreclosure process.During these efforts, SHAD solicited proposals from area developers and selected Michael Montlack to develop the properties. Montlack’s, an experienced developer and owns about two thousand residential units.Unfortunately, the Cuyahoga Land Bank acquisition was delayed further when a lien holder asked for more time to try and sell the properties at sheriff sale. Fin