Tremont West Development Corporation (Tremont West) recently succeeded in establishing a new housing development opportunity for a vacant and abandoned property along Scranton Road. The twelve thousand square foot commercial property, the Ohio Bell Building, was built in 1904 and originally owned by the Cleveland Telephone Company.  Over several years, the property fell into disrepair and became a nuisance to the neighborhood.  Thanks to Tremont West’s advocacy the property will soon become an asset for the community.

Back in 2011, the property was originally brought to the attention of Tremont West for code enforcement when the property owner faced prosecution in Cleveland Housing Court.  The building had previously been used for piano storage, but after a lack of maintenance and a fire the building owner soon walked away from the property. After years of disinvestment the property fell into tax foreclosure.  Due to the large delinquent tax bill the property went unsold at sheriff sale and was forfeited to the state of Ohio.  Tremont West, determined to find a reuse for the property, began to reach out to potential developers. Finally, Mancini Group LLC identified a rehabilitation plan to create fifteen residential market rate apartment units. The Cuyahoga Land Bank used its legislative authority to obtain legal entry to the property for the potential developer, while it was held by the state.  This access gave the developer a clear scope of the building’s current condition’s and offered confidence for redevelopment. Tremont West then reached out to the Cuyahoga Land Bank to acquire the property from state forfeiture.  Once acquired, the Cuyahoga Land Bank conveyed the property to the developer.  Matthew P. Yourkvitch, of the law firm Moore Yourkvitch & Dibo and attorney for the Mancini Group LLC, comments “We are excited to work on this project and contribute to the collaboration within the community development network. We were on board, the moment we learned of the developer’s vision to restore an abandoned historic gem in the Scranton South Side Historic District.” 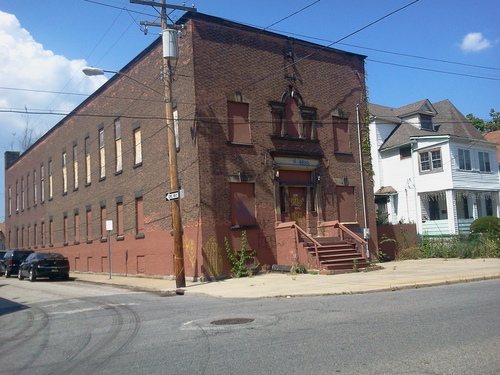 This project will coincide with the Scranton Road continued redevelopment. Most recently the street was placed on the National Register of Historic Places. The Ohio Bell Building is one of the thirty four sites listed along Scranton.  Cory Riordan, Executive Director of Tremont West, expressed his excitement “This is a transformative project that will continue the momentum along the street.  Not only does it bring life back to a blighted property, but it increases further investment along Scranton.”  The project already has a commitment letter from Metro Health supporting future housing options for their employees.  The developer hopes to use State and Federal Historic tax credits, with bank financing for the Historic Building.  Mancini Group’s LLC owner, Enio Mancini, stated that, “We hope that this project will serve as a catalyst for additional development in the Scranton South Side Historic District. We want our building to contribute positively to all the redevelopment occurring along Scranton Road and around Metro Health.” The project gives tribute to the successful collaboration between community partners to repurpose another vacant and abandoned property.