This past summer, the nonprofit Thriving Communities Institute (TCI), a program of the Western Reserve Land Conservancy in collaboration with the City of Cleveland has been surveying the property condition of all 150,000 parcels in Cleveland.  The project is in collaboration with the City of Cleveland’s Building and Housing Department, Cleveland City Council and local community development corporations.  Partial funding for the survey was committed by the Cleveland Foundation. 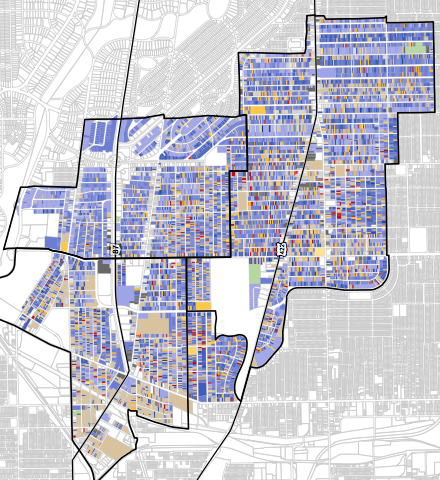 TCI will conclude the city wide survey this fall. TCI has completed community-wide surveys in Akron, East Cleveland, Lorain, Sandusky and Oberlin.  The Cuyahoga Land Bank worked closely with TCI on a prior neighborhood survey targeting blight removal in the Buckeye-Shaker, Mount Pleasant and Buckeye-Woodhill neighborhoods surrounding St. Lukes Campus in Cleveland. These neighborhoods are faced with vacant properties that have become a threat to the community.
The initial neighborhood survey was made possible by the St. Luke’s Foundation which awarded TCI, a two-year grant to target and identify blighted properties in the Buckeye and Mt. Pleasant neighborhoods for the St. Luke’s Project, which began in late 2013. By the end of March 2014, a group of seven assessors had walked the streets and surveyed the conditions house-by-house.
The survey covered a total of 13,000 residential and tax-exempt parcels that included 2,000 vacant lots and resulted in identifying 1,500 vacant and distressed properties (map above). These properties were then graded on an A to F scale, describing the of the property. An “A” for those that were in very good condition to an “F” for those structures that were uninhabitable and dangerous.
According to the St. Luke’s Property Inventory Report, the properties were identified as: Occupied structures, A – 28%, B – 47%, C – 23%, D – 2%, and F – 0% and Vacant structures: A – 3%, B – 9%, C – 22%, D – 31%, and F – 35%.

Following the survey, the most blighted properties that had a grade of “F” were advocated for demolition.  This initiated the  Cuyahoga Land Bank to play a role in the project.
The Cuyahoga Land Bank then followed to strategically target demolition of these properties and is still working to do so.  TCI continues to advocate for demolition since it will take a fifteen million dollar investment to address all 1,500 target properties from the St. Lukes Project.
“There are several steps that must be taken in order for us to breathe new life into our communities,” said TCI Special Projects Manager, Jay Westbrook.  “The first is identifying the problem and that’s what the St. Luke’s Project has done.  The second is to address the blight through demolition and building code enforcement.  Only after these first two steps have been taken can we successfully redevelop, repurpose and green these properties.